SHE COULDN’T DO IT.

“Okay,” she said, the shaking in her voice more than obvious. “Here I go.”

But then, before she knew what was happening, the gun was snatched from out of her hand.

“What the crap is going on in here?”

It was the guy in the fedora. Norman.

“Stay out of this,” Adam said.

“Not gonna happen, son,” Norman said. “Ain’t we got enough out there to deal with without y’all shooting each other? Now tell me what’s going on.”

“He’s been bitten,” Tracey said. Her eyes were on the floor. “We know what that means. He’s going to turn.”

Norman, to her surprise, erupted in laughter.

“Yeah,” Norman said between guffaws. “Yeah it is.”

It took him a few moments, but eventually Norman got his laughter under control. Tracey’s eyes remained pointed at the floor. As the laughter stopped, she looked up.

The pain no longer shone on Adam’s face. It had been replaced by anger as he watched Norman.

“Y’all have seen too many movies,” he said, wiping the tears from his eyes. “These ain’t like those zombies on the tee-vee. They bite you, then you’re just bit. You ain’t gonna turn.”

“You sound pretty sure,” Tracey said. “What makes you the expert?”

“I’ll tell you what,” he said, pocketing the gun. “You get the officer here all bandaged up, and then I’ll explain everything to everyone. I don’t like repeating myself if I don’t have to.”

It was then that she noticed that he was carrying one of the store’s plastic bags. In it were some of the first aid supplies from off the shelves. He handed it over to her.

“I have some of that antibiotic stuff in there that you can put in his wound,” Norman said. “And gauze pads and wrap.” He turned to Adam. “We need to get you to the hospital, but we need to get out of here first. These will do for you until we can.”

With that, Norman left.

Tracey worked in silence as she bandaged Adam’s arm. Adam, thankfully, didn’t say a word through the whole procedure. Once done, the two stood there together in silence for a moment or two. Neither one wanting to be the first to speak, or just not knowing what to say.

Adam lowered his head and looked up at Tracey. Then, to her astonishment, he stuck out his lower lip, looking for all the world like a child who had just dropped their ice cream cone into the dirt.

She wanted to smile. But she couldn’t tell if Adam was serious or not.

Then she saw it. A ghost of a grin flickered across his face.

“He is stupid,” she said, then smiled.

Soon they were both smiling. It would take more than a moment of silliness to dispel the cloud of awkwardness that now hung over the two of them, but it was a good first step.

“We should probably get out there,” Tracey said.

As Tracey and Adam left the restrooms for the store, Dan and Luke were moving a large bit of shelving to block the double front doors. The row of shelves—about five feet high and six feet wide—was on wheels so that it could be moved around the store to showcase items that needed a quick sell. Each of the wheels had a braking mechanism so that once the mobile shelf was where it needed to be, it could then become more stationary. Given everything else in the store, Tracey could see that it was their best bet for keeping the creatures out.

With that task complete, Norman gathered everyone together as a group near the front counter. The strange man in the fedora stood before them, his back to the front wall. They could all see the creatures outside, clawing at the glass like hungry robots.

“I think it best, before we talk about just what’s going on outside,” Norman began. “That I tell you all who I am and what I do.”

He paused long enough to look them each in the eyes. When he got to her, Tracey found comfort in his gaze. She could sense a strength there, a resolve, and it told her all she needed to know about the man: He’s been through this before and if anyone can get them out, it’s him.

“My name is Norman Oklahoma,” he began. “I’m a private investigator who specializes in the supernatural, the unexplained, and the just plain weird.”

Norman aimed a thumb over his shoulder and the things outside.

Once more, Norman aimed a thumb over his shoulder.

“It’s important that y’all understand this,” Norman continued. “Most monsters are, in many respects, like you and me. They have jobs, they pay taxes, they send their kids to the same schools as everyone else. They just have this little extra something about them. They’re part of a hidden world that most people don’t even know exists. But it does, and you’re aware of it now, I’m afraid. I’ve brought this all to your doorstep, I’ve forced you into this, and I’m not even sure why.”

“You brought this to us?” Tracey asked. “What does that mean?”

“It’s not really important. Not right now. What’s important is what we’re facing and how we get out of it. Which, to toss a bit of good news your way, is gonna be more than a little easy. Those, well let’s just go ahead and call them zombies. Those zombies out there, they ain’t like what you know from television or the movies. They can’t turn you into one of them, which is good. But they also can’t be taken out with a shot to the brain, which is bad. These’re folks who have been dead and buried, most for a good long time, and they have now been reanimated for nefarious purposes by a necromancer.”

“It did fall,” Norman said. “And then it got right back up again.”

Tracey couldn’t help but look out the windows at the creatures, the zombies, pressed up against the glass. She didn’t see the one that had bitten Adam’s arm, but that didn’t mean it wasn’t out there. The shelf blocked the sight of most of them anyway.

“The only way to really stop one of these zombies is to set it on fire and let it burn until there ain’t nothing left but ash,” Norman said.

“So when do we get to the good news?” the old man asked.

“A necromancy spell, such as this, only works when the sun is down. All we need to do is wait them out. The sun will be up in two hours, and then the things out there will drop and we can leave.”

“What about this neco-wafer thing?” Dan asked.

“Yeah, that,” Dan said. “What’s going to stop him from getting in here?”

“Well, we don’t know it’s a him,” Norman said. “Could be a her. Not that it matters. But no, I don’t think they will try to come in here themselves. Any wizard willing to use necromancy to hurt someone ain’t got the guts to do it themselves. No, we’re safe in here.”

“Why don’t I just call in for backup?” Adam asked.

“Because then all your little cop buddies are gonna die,” Norman said. “Didn’t you hear me? You can’t put these things down. They are unstoppable killing machines.”

“Unless you set them on fire,” Luke said.

“Look, all we have to do it wait them out. Two hours. We can do that.”

They all nodded in agreement. Everyone, Tracey noticed, except for the old woman who was looking around with a concerned look on her face.

“She’s our granddaughter,” the old man said. He too was now looking around in concern.

“She’s okay,” Luke said, pointing down one of the aisles and smiling. “She’s over here having a snack.”

Yet, as Emily’s grandmother approached, her face went white.

“Emily, what are you eating?”

“Candy bar,” the little girl said holding out what looked like a half-eaten granola bar.

“Oh no,” said the old man as he took the bar from her. “It’s got strawberries in it.”

“Emily is allergic to strawberries,” said the old woman. “We have about twenty minutes to give her a shot before her throat closes up and she stops breathing.” 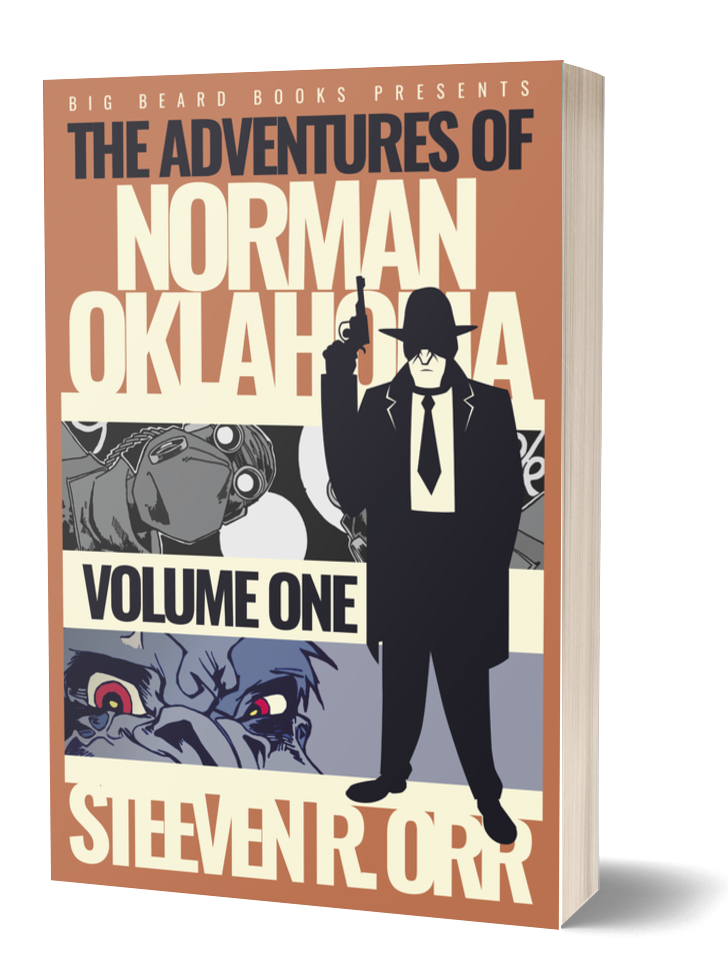