THE SILENCE DIDN’T LAST long. It was soon replaced by the sound of sirens in the distance as Eudora’s finest raced to my rescue. I figured it was only a matter of time before Pat and her boys showed up. You can’t make a spectacle in town like the Walrus did without attracting the eyes of the law. I’m sure that in some part of his mind he knew that the police would eventually make their presence known. I had no idea what he had had in mind for the police once that happened. Maybe his rage just wouldn’t allow him to plan for such an eventuality. I don’t know.

I took a seat on the hill next to the Walrus. My spine was still healing, so I lay flat on my back and let my body do its thing.

I couldn’t see the driveway from behind the house, but it wasn’t long before I heard no less than four squad cars roar in. After that I heard the slamming of car doors, and then there was nothing.

I imagined Pat and her boys standing on the porch looking at the space where my front door used to be.

“This is the Eudora Police Department,” Pat’s amplified voice sounded from over the top of the house. She must’ve brought a bullhorn with her. “Come out with your hands in the air!”

I sighed and shook my head. I wanted to shout out to them, but I just couldn’t find it in me. After the morning I’d had, I was exhausted and yearned for sleep. I thought about my bed and sighed again.

Eventually, after hearing no response from within the house, Pat and the boys would have to enter. They would go in, guns drawn, and search room to room. Someone would shout “Clear” each time a room was checked and found empty. They would move methodically through the house, and as my room was in the back, they would reach it last. But, sooner or later, they would get to my room and find what I can only assume would be a hole in the wall where the window used to be, and surmise by the fact that since all the glass and drywall lay scattered about on the grass and not in the room, that we’d taken our fight outside.

I started to drift off there among the leaves, the breeze blowing over me like a cool blanket. Then something landed lightly on my chest. I opened my eyes and raised my head just enough to find a squirrel—yeah, that squirrel—watching me.

“Hey there, little guy,” I said. I had begun to feel like I’d just swallowed an entire bottle of whiskey in one go. The healing will do that to me.

The squirrel cocked its head.

“Look, I’m sorry about earlier,” I said. “I was frustrated and I’m afraid I took it out on you, and that’s not fair.”

The squirrel just continued to sit on my chest and look at me, its nose twitching so rapidly that it was practically vibrating.

It approached my proffered hand with a caution one often sees in small animals. It took a quick sniff at my fingers, looked up at me one last time, and then sank its teeth into the flesh of my hand; breaking skin and drawing blood.

I shouted a curse—I mean, why wouldn’t I—and swung a fist at the dirty rodent. I missed, of course, and it hopped away unharmed into the woods.

“Next time I see you I’m just gonna start shooting!” I called out after the thing. “You hear my you son of a—”

I turned and found Pat standing over me, a perplexed look upon her face.

“Oh, hey, Pat.” I rose up on an elbow, shielding my eyes at the sun which had made another appearance.

“You okay, Norman? Your house—” she glanced over at the Walrus who lay in a lump beside me. “He alive?

“Tell me what happened?”

I did. Of course I left the part out about my chat just now with the squirrel. I figured that was best left between me, myself, and I.

“You’ve had quite the taxing day, my friend,” Pat said, offering me a hand up.

“That I have,” I said, brushing the leaves off of my rear end. “How’d he get loose in the first place?” I said, nodding toward the Walrus.

“Well,” Pat said, her face going flush. “He kinda snapped his cuffs and tore the doors off the back of the van we had him in. Then he just sorta jumped.”

“I tried to warn you, Pat. The Walrus ain’t someone you want to play around with.”

We stood in silence for a bit. I noticed the squirrel in the tree above me. I gave it a hard glare.

“I guess you know I’m gonna have to take you in,” Pat said in her typical casual style.

“I wasn’t talking to no squirrel, he was bothering me—wait,” I blinked. “What?”

“You shot up the Pub, Norman,” Pat said. “There were seven witnesses.”

“I didn’t shoot up no pub,” I said. “And there certainly weren’t no seven witnesses. Abner’s lying.”

Pat gave me that look. The one that tells me she knows I ain’t telling the whole truth.

“Okay, yeah, I shot a couple of vampires a few times, but that’s it.”

“Vampires, Norman? In Kansas? Who in the world is gonna believe that?”

“Of course I believe you, Norman. But I’m about it.”

“We did, Norman. He tells us you stormed into the Pub and started shouting and shooting up the place. I’ve seen the damage.”

“Well he’s a dern liar,” I said. “He musta done all that after I left. You check the ballistics on them bullet holes? They .45 caliber? What about the slugs? Were there any slugs? Not all of them will match my guns.”

“Come on, Norman. What do you think this is? CSI Miami? We’re just one small town in the middle of Kansas. We’d have to send off to Topeka or Kansas City for a crime scene investigator and frankly, I just don’t think this case warrants such expenditure,” she smiled.

“All I did was shoot a vampire, Patty. I didn’t even kill it cuz I ain’t packing silver.”

“I still gotta take you in, Norman. It’s just a formality. Just answer our questions and we can let you go. I don’t think Lemonzeo wants to officially press charges.”

“Okay, fine. I’ll come quietly,” I said, raising my hands in the air.

“Put your hands down, Norman. It’s not like that. Just go get in the car and I’ll drive you down to the station.”

“You gonna bring me back home too?”

“Your Scout’s still at the office, right?”

“Then you have a ride home. Let’s go.” She took me by the arm and we walked around the house.

Pat took the Winchester and bundled me up in the back of her car as the rest of her boys loaded the Walrus into a paddy wagon. I’d noticed that they had no less than four pairs of cuffs on him—they weren’t taking any chances this time. That was good.

As I sat in the back of Pat’s car, watching the lights of the other squad cars rotate and bounce off the house, I thought back on my day. Nearly killed by a walrus, gnawed on by a troglodyte, lost in a goblin warren, nearly killed by a walrus once again, bitten by a squirrel, and then arrested for shooting a vampire.

Some days it just doesn’t pay to get out of bed. 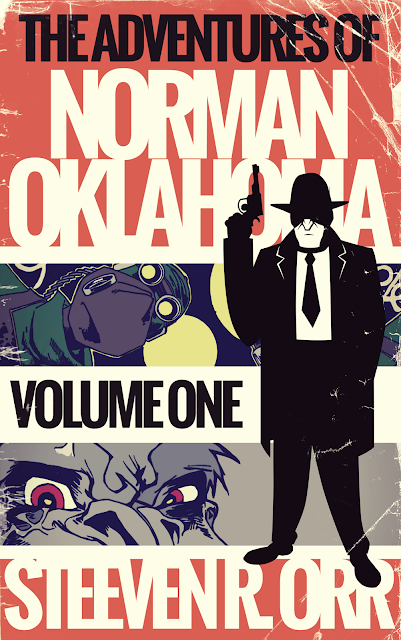